About 6 weeks ago I got a fascinating email through the web site Rookie Moms. I had never heard of them at that point. Whitney, associated with the website, wrote wanting to mail me a new toy just brought to the market. I thought this email had scam written all over it. (once again, I was corrected - this was legit!)

I forwarded the email to my husband Jim (who is a geek by trade) and thought we had nothing really to lose. I provided my name and address.. nothing else. The deal was I was to write a review on the toy. The deal got sweeter - they were going to send me two toys.. one to give away to a family or organization in need.

I know you are all wondering what the toy was! It's called Mrs Goodbee Dollhouse 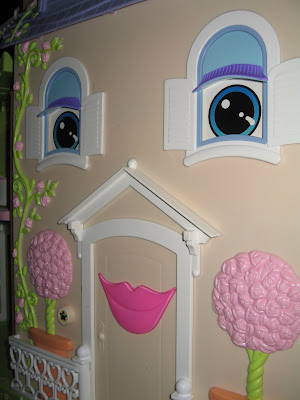 Both Sara and Eli were so excited when the UPS guy arrived at our door with 2 huge boxes! It was Christmas in October!

Here is a short video of the kids learning about the toy before we opened it:


Here is my review of Mrs Goodbee. I'm basically going to break it down into pros and cons. Please keep in mind that my children are almost 9 (daughter - Sara) and 3 1/2 (son - Elijah).

I assumed that Eli would play with it and love it. I didn't expect Sara to be interested at all. Boy, was I wrong!

One of the first things I loved about this dollhouse is it's simplicity. The house folds up easy for storage. (yet, we've haven't put it away since we got it!)
There were a few very minor things to put together. (ie. the yellow outdoor stairs that lead to the front door and the bay window) There are not a tons of pieces. The kids were able to play with it within seconds! This would make a great "out of the box" Christmas gift. Have you ever tried to open up a box of a billion pieces of polly pocket or barbie on Christmas morning? yikes! 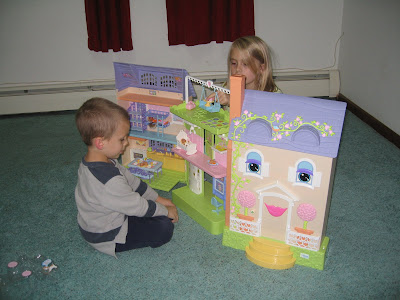 The house opens up to reveal 3 sections that have 3 levels. There are 12 rooms total! A kitchen, bathroom, bedroom, living room and lots more!. This toy is great for 2 kids. There is great fun on both sides of the house - so each can be playing on their own. No fighting kids.. yeah!

We loved the sounds that make the house come to life! The sounds are so real: Jim thought somebody was at our front door, it was the doorbell of the dollhouse! Eli flushes the toilet over and over! He thinks it hilarious! Boys! 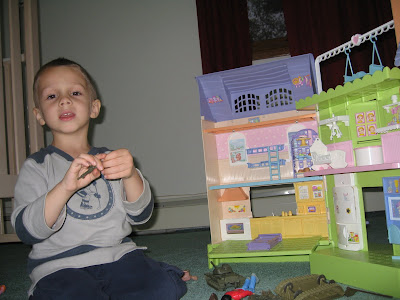 There are many things to with the house. It leads to lots of imaginary play. Elijah even added his army men... there is always some sort of attack or invasion in his world :)

The house comes with a dog, a baby, and a girl. Personally, I think the whole family should come together. But naturally, they are sold separately. I can see buying extra furniture and extended family - but I think initially the core family should be together.

Sara says she wishes the front door would open to invite friends in.

The company that puts out the product, Learning Curve, really want us to get the concepts of caring, sharing and preparing. Because I knew I was going to write a review I was looking for these concepts... didn't see them as much I had hoped. Learning Curve has teamed up with Good Will. They want us to use our empty box and fill it up with unwanted clothes and toys to donate. You read about this on a piece of paper on the inside. I would have liked to have seen the the Good Will logo on the outside of the box.

The company web site also offers a "key" to go to play games and learn more. For Elijah - he was too young. For Sara - it was too old for her. (she is more interested in playing games on her Webkinz site) I think the web site games would be good for a 5-7 year old.

So who did we give the extra dollhouse to?

We gave the other dollhouse to a missionary family that lives in Northern Wisconsin. They have an almost 5 year old girl and an almost 3 year old boy. After about 2 weeks I asked what they thought - they had pretty much the same thoughts we did - they wanted more pieces of family members but they loved all the sound effects!

They loved how Mrs Goodbee had a little bit of an English accent and wondered if their kids would start talking like that since they played with it so much!

Thank You so much Rookie Moms for letting us play with Mrs Goodbee!

I'm glad your kids are so engaged with the dollhouse. Your review is very thoughtful and I appreciate it. Also, your donation is a wonderful example to everyone. I just took my filled up box to Goodwill yesterday and couldn't stop myself from telling pregnant women I saw there to go check my donations for newborn clothes!

Looks like fun. Makes me miss the days of this kind of play with my girls.